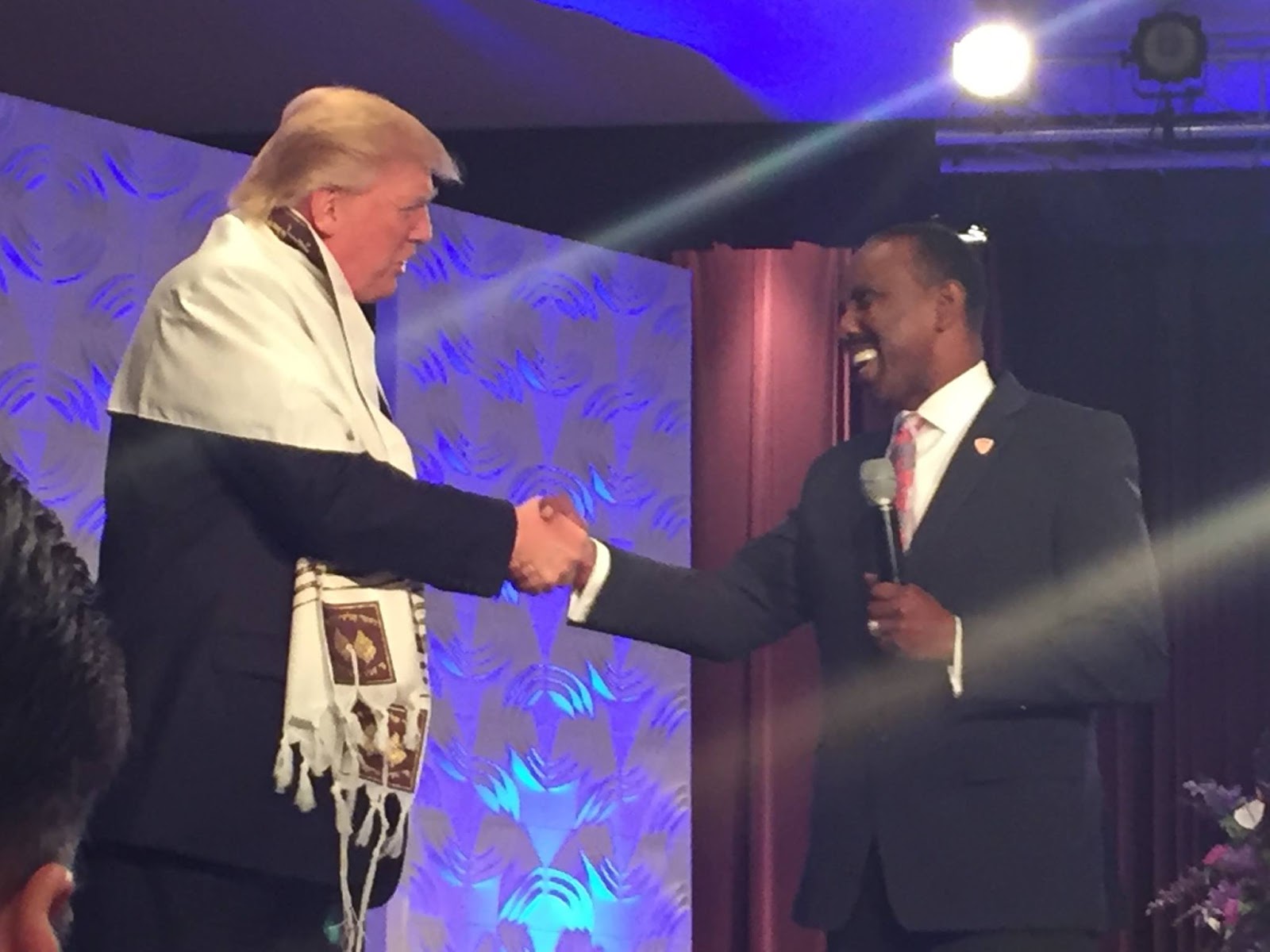 This past weekend, Detroit pastor Bishop Wayne Jackson draped a tallit around Donald Trump’s shoulders at service. What was the Jewish reaction? Well, that takes us to the rest of the story that I am about to tell you.

Most Jews I know are probably confused about seeing Donald Trump wearing a tallit. Some of my congregants said, “He looks ridiculous!” Another said, “Non-Jews are not supposed to wear a tallit!” One old friend of mine from San Francisco reacted with righteous indignation: How dare these Christians co-opt our religious symbols and heritage!

Let us flip this question on its proverbial head: What if Bishop Jackson had given the tallit to Hillary, or Barak Hussein Obama to wear? Would our reaction as a community be the same? In all candor, Rabbi Rutenberg would probably qvell and wish Hillary or Obama a hearty, “Yashar Koach” with  raucous applause–especially if she were in the picture!

Interestingly, one of the oldest references to the wearing of tsitsit outside the Talmud or Midrashic literature can be found in the Book of Matthew, where Jesus criticized some of the Pharisees of his day, “They perform all their actions to be seen by men. They broaden their phylacteries; they wear outsize tassels” (Mat 23:5). Yet despite Jesus’s criticism of what he felt was a gaudy display of religious piety, Jesus wore tsitsit (Mat. 9:20). Evangelicals often feel that more of their people should try to practice the Judaism that Jesus practiced in his day, so that they may become more like him. A lot of evangelical ministers actually sound the shofar at the beginning of their services.

Frankly, that’s not a bad idea.

Their motivation in my view is not a sign of disrespect, but actually a sign of respect that we should all admire. Evangelicals believe that by blessing the people of Israel, they too will be blessed:

Those that bless you I will bless,

those that curse you, I will execrate.

All the families on earth

will pray to be blessed as you are blessed.’

The phenomenon of Christian Zionism has proven to be a tremendous source of moral and financial support for our brothers and sisters living in Israel. Orthodox rabbis like Shlomo Riskin heaps praise upon the Evangelical community every Christiams. Palestinian merchants too are glad to see these Christian pilgrims as well. During the war with Hezbollah, one of my Reform colleagues from Illinois felt deeply moved when he saw the number of Born-Again Christians and evangelicals travel to Israel in the middle of the war to assist the country any way they can.

Are they not infinitely superior to the self-righteous Presbyterians, Methodists, and  the United Church of Christ who often demonize the State of Israel in their weekly Sunday services?

Beyond that, in praise of the Evangelicals, I will go one-step further.

It is this writer’s opinion, if Christians wish to observe certain Jewish customs, they have every right to do so, moreover such a view is actually well-attested in traditional rabbinic sources.

Now some of you might be surprised to know that the Talmud speaks about Gentiles following Jewish traditions.

In one Talmudic passage, the King Arteban of Persia one day sent a gift to Rabbi Judah.  The gift was an exquisite and quite expensive pearl.  The king’s only request was that the rabbi send a gift in return that was of equal value.  Rabbi Judah sent the Persian king a mezuzah. King Arteban was displeased with the gift and came to confront the rabbi.  “What is this?  I sent you a priceless gift and you return this trifle?” The rabbi said, “Both objects are valuable, but they are very different.  You sent me something that I have to guard, while I sent you something that will guard you.”[1]

What kind of protection was Rabbi Judah alluding to? The divine Name Shaddai is written on the back of every mezuzah. Shaddai is an acronym “Shomer Dalatot Yisrael” “Guardian of the Doors of Israel” and not people like King Arteban!

One might wonder: What good is sending a mezuzah to a Gentile King who is not a member of the “Jewish tribe”? Yet, the Talmud seems to suggest that just because a non-Jew is not obligated to observe Jewish rituals, if he did observe Jewish rituals, he certainly receives a reward for doing so! Non-Jews are not necessarily excluded from observing Jewish traditions–contrary to Rabbi Rutenburg.

Maimonides makes a remarkable point in his Mishnah Torah, for he writes: We do not prevent a non-Jew who wishes to perform one of the Torah’s mitzvot in order to receive a reward for doing so—provided that he performs it properly.[2] Unfortunately, Maimonides was not always consistent in this regard, for Torah study is meant for Jews only—not non-Jews.[3] He also felt the same about non-Jews wishing to observe the Sabbath.[4] Despite some old rabbinic attitudes that prohibit non-Jews from studying Torah, in practice most rabbis will probably acknowledge that non-Jews (often along with their Jewish spouses) are certainly permitted to study Torah in a synagogue class.

In practice, most Jews are open-minded when it comes to inviting non-Jews to a Passover Seder, a Bar Mitzvah, or a Shabbat service. Even Chabad invites gentiles to light a menorah during Hanukkah!

Perhaps most importantly, how can perspective proselytes know how to observe the mitzvot if we do not grant them access to much of our sacred traditions?

In short, during the medieval world, positive and respectful Jewish-gentile relations were rarer than they are today. When Trump received the tallit from Bishop Wayne Jackson, instead of getting irritated, we should feel proud that Trump gladly donned the tallit. We should feel the same whenever anyone in the non-Jewish community wishes to show respect to our faith and heritage.  Sometimes in our zeal to be “self-righteous” we often demonstrate a lack of broad-mindedness and generosity of spirit.  Only God knows what is in the hearts of mortals, and we would be wise to recognize that everyone deserves the benefit of the doubt.