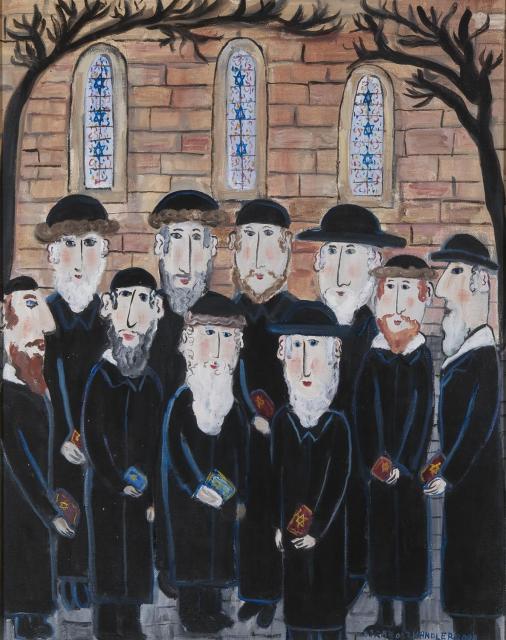 Askarabbi: What is the origin of the Minyan?

The custom of the minyan is only rabbinic in origin. When examining the minyan’s origins, it is vital we remember that this custom is not something that is etched in stone. However, as a custom, it does have a rich and variegated history that cannot be reduced to a single point of view–nor should it be.

The origin of the minyan is discussed in the Talmud. Some expositions are much more oblique than others  [1], while other suppositions are by far, more lucid. The Midrash Tanchuma (Parshat Miketz 6) explains that since the time of Abraham’s famous defense of the Sodomites, namely that a “congregation” consisted no less than ten people, for ten constitutes an “edah” a “community.” On the other hand, that both Talmudic traditions stress only men make up a “congregation,” even though the Abrahamic story clearly indicates that women also made up part of the minyan Abraham was seeking to extricate!! [2]

On the other hand, there are other rabbinical passages dating back to the Gaonic era (8th-10th centuries) that in Palestine, a minyan consisted may have consisted of seven or six people.[3]

The liturgical historian Abraham Milgram notes that after WWII, a number of Jewish communities actually went back to counting six or seven people as a “minyan,” until the time their ranks would grow in number. This specifically happened in the city of Dubrovnik, Yugoslavia. Incidentally, the framers of the Halacha were well aware of this possibility and its antecedents in Jewish tradition.  In functional terms they ruled, if a prayer leader began saying the Kaddish, or for that matter any other portion of the service that would ordinarily require ten people[3], one may conclude any of these services so long as at least six men remain in the sanctuary.[4]

Some sources suggest that even nine people could constitute a minyan so long as the Ark is open; this does not mean that the “Ark is a person,” but rather God’s Presence can also make up as the “tenth man” so to speak.  There is some Aggadic basis for this custom. When Joseph disappeared, the verse later says that “his father wept for him,” which could mean either Jacob (the plain meaning of the text) or possibly, Isaac. One Midrashic account raises an obvious question: “If Isaac knew that Joseph was alive, why doesn’t he reveal this fact to Jacob?” The Midrash answers, “The Holy One, blessed be He, has not revealed it to him; am I then to reveal it to him?” This statement gave rise to the odd rabbinic theory that God was part of the brothers’ conspiracy never to reveal the whereabouts of Joseph!!

Elsewhere, the Halacha mentions a number of other secondary Halachic references indicate that even a child may be used to make up the 10th person of a minyan—so long as he knows how to pray or holds a chumash in his hand (O.H. 55:4, see Mishnah Berurah on note 24), or according to another Ba’al HaMaor (cited in by the Rav 55:5), even four minors may be added to the minyan. One medieval source, Rabbanu Simcha adds that even a woman may count as the tenth person; it is remarkable that R. Sheneir Zalman of Liadi rules in his Rav’s Shulchan Aruch (O.H. 55:5) that one may rely on this lenient opinion—despite the fact that one would never expect to see such a leniency ever practiced in a Lubavitcher minyan!! (When I once brought this to a local and well-known Chabad rabbi, he looked at me with great surprise. But the truth and the texts speak for themselves!)

This type of reasoning is called, “pilpul” (pepper), and such didactic approaches while they may be interesting, are obviously far from being the contextual meaning of the text.

When examining rabbinic traditions regarding the minyan, it is important to bear in mind that in rabbinic times, only men attended the congregations to pray. In reality it is not the interpretation of the verse that creates the custom, but quite the reverse: it is the already existing custom that creates the interpretation that justifies its etiology.  Nowadays, since women also form a part of our society’s leadership, there is ample reason to argue that a woman should be included as part of the minyan. As social realities change, so too does the interpretation. This is the way it has always been, there is no logical or compelling reason to think otherwise.

[1]One traditional source in T.B. Megillah 23b records that a minyan derives a semantic connection regarding the word “midst,” mentioned in the precept of sanctifying God’s Name (Lev. 22:32) and another passage that speaks about Moses and Aaron separating themselves from the “midst,” of the congregation (16:21). Concerning the latter, the term “midst” is used in conjunction with the phrase “congregation,” i.e.,  the ten spies who brought back a negative report of the Land of Israel. This interpretation is hopelessly contorted and forced.

[3] Rabbanu Yona of Gerona (ca. 14th century, Spain)  notes that not all rituals which sanctify the Almighty’s name are classified as “de’varim shebikdusha” ( BT Berachot 21a, s.v., “v’nik’dash’ti”). Such examples would include: Kedusha, Cha’zor’at Hashatz, Ne’si’at Kapayim, K’riat Hatorah, or the recitation of the  Haftorah with its accompanying blessings. Simply put, the acceptance of the heavenly yoke in the recitation of the “Shema” is not a precept requiring a minyan per se.  Wherever there is a sanctification of God’s Name, that is where a minyan is thus required. These specific services cannot be performed in the absence of the minyan quorum. There are other important implications with respect to the precept of martyrdom that requires that one be willing to die in the presence of at least ten Jews–and Maimonides makes no distinction about the gender or even the age of these individuals. Since the laws of minyan derive from this particular biblical precept, it follows that there is ample room for a different and newer kind of deconstruction of the minyan concept that modern Orthodox rabbis have neglected to consider.

This year’s San Diego Yom HaShoah presented one of the finest programs I have experienced in many years since arriving in San Diego almost eight years ago. The musical selections were excellent; the theme of the program was “Memory and Morality” and featured Roberta Grossman, who is the director and producer of new Holocaust film, “Who Will Write Our History?” Her movie is based on upon Samuel D. Kassow’s book, Who Will Write Our History? (Vintage Press, 2009). The book is a compelling read and I hope to have more to say about this remarkable testament to history in the weeks to come. Although Grossman was not a survivor or even the child of a survivor, I admire her iron determination in directing a new film that every person needs to watch, witness, and learn.

Kassow narrates the tragic story of Ringelblum and his heroic resolve to utilize historical scholarship in preserving the memory of the endangered Jews of Warsaw. Her soon to be released film is scheduled for January 2018 and it offers a remarkable glimpse into the world of the Warsaw Ghetto uprising, which took place in the summer of 1942.

While many cinematic presentations of the Holocaust often portray Jews acting passively during the Holocaust, the Warsaw Ghetto uprising tells a different story that is seldom ever told—Jews taking their destinies into their own hands by organizing armed resistance against the Nazis. They did this by smuggling weapons and improvising homemade weapons. Actually many Jews in the ghettos across Eastern Europe between 1941 and 1943 formed over one hundred Jewish battalions against the Nazis. The Warsaw Ghetto was by far the most famous of these efforts. That year in 1942, over 300,000 Jews were deported from Warsaw to Treblinka, Poland, where between 700,000 and 900,000 Jews were exterminated. When the Warsaw Jewish residents in Warsaw heard about this, a young 23 years-old heroic figure named Mordecai Anielewicz, called upon Jews to resist going to the railroad cars. With the weapons they smuggled, they fired upon the Nazis—and they retreated.

Grossman pointed out how the resistance against the Nazis took an unusual form—a group of Jews prior and during the uprising in 1940  knew that they would not survive, but they nevertheless got together to create an underground archive that would preserve their memories as a people. The man who created this archive was named Emanuel Ringelblum. He began formed a secret “sacred society” he called, “Oyneg Shabes” (literally, “Joy of the Sabbath,” as members often met on Saturday). Its purpose was to create a comprehensive archive of life in the ghetto, “to meld thousands of individual testimonies into a collective portrait.” Ringleblum’s archives present a realistic picture of what the people were like and he minced no words in telling a future audience about the heroes, villains, bystanders and the perpetuators’ stories. He instructed them to collect everything they could. Some were artists, thinkers, intellectuals, teachers, factory workers, and so on.

In one story, Ringleblum’s life was also saved by Poles, who also resisted the Nazis. Indeed, many Poles took considerable risks saving Jewish lives. Yet, in his chronology, he also wrote about how other Poles chose to do nothing for their Jewish neighbors. He expressed the hope that someday Jews and Poles would come together and honestly share their stories. His description reminded me of a story I had heard from my father, whose life was saved by a young Pole. In one of the ghettos, the Nazis went on a wild shooting spree, and my father was with his Polish friend. His friend was shot, and knew he was going to die. To save my father, he hit in the head and knocked him out. The Nazis thought he was already dead. Were it not for the gratuitous kindness of this Polish young man, I would not be writing about his heroism.

On another personal note, in my rabbinic career, I was privileged to know a woman named Esther Avruch, whose petite presence survived the horrors of the Warsaw Ghetto. She too recalls how some of the Poles could act just as cruel as the Nazis; some would beat the Jews and seize their meager rations of food and water. Yet, other Poles exhibited profound humanity toward her and her family. Starving for food and drink, simple Polish peasants, like a miracle from God, shared their food with the family. They were friends of Esther’s father’s business partners. They acted morally and with compassion.

Ultimately, on September 18th, 1946, Jews and Poles dug through the rubble of the remains of a former school located on Nowolipki St. What they discovered were three buried caches of the Oyneg Shabes archive. Some of the records suffered from decay and decomposition from moisture that seeped in the documents.