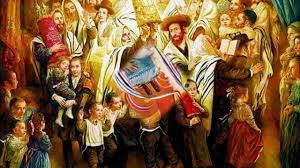 Simchat Torah is a relatively new holiday. Nowhere is it mentioned in the Talmud; nor is it mentioned in Maimonides or the Tur Shulchan Aruch. But it is explicitly mentioned in the Zohar,[1] a work that dates back to about 1270—although it is a holiday that probably began many centuries earlier when the Babylonian and Palestinian communities finished reading their Torah cycles. Undoubtedly, just as the conclusion of Talmudic tractate always served as a festive occasion—it is a certainty Jews rejoiced in deed whenever their communities finished reading the Torah.[2]

One of my Modern Orthodox colleagues, who works as a day-school teacher  in New York, surprised many of us with a candid remark about his experience of Simchat Torah. He confessed that he struggled with the holiday more so than any of the other High Holidays of the year. He felt that its celebration felt “mailed in and tired.”

Interestingly enough, several other Orthodox friends chimed in and expressed similar thoughts. Some complained about the length of the service. Some people felt they preferred making their own “personal” Simchat Torah concluding a Talmudic tractate or section of the Mishnah. Others thought the synagogues lengthen the Hakafot beyond the realm of sensibility.

As I thought about this discussion, I realized that many people may feel simply overwhelmed with the plethora of holidays we celebrate this time of the year. In other words, people’s ambivalence may in fact reflect tiredness.

Here at Chula Vista’s Temple Beth Shalom, most of our growing congregation is made up of Spanish members who have re-embraced Judaism over the last several years. I often like to tell them about how marvelous their spiritual journey has been for them. Despite several centuries of efforts to forcibly convert the Spanish Jews to Christianity, the Church failed. The fact they are here among us is proof positive that the Jewish spark of their ancestral identities could not ever be destroyed. So it remained dormant—but on one unexpected day, something awoke from within them.

Reclaiming the “lost children” of Latin American countries can help revitalize any Jewish community that is willing to welcome them back. One of my favorite newly minted Spanish Jews went with his friend to a Chabad store on Fairfax Ave. The rabbi had no problem asking the Jewish woman to say a blessing over the lulav, but when her Spanish friend asked to say the blessing, the rabbi looked at this dark-skinned Spanish looking Jew in total disbelief. “Are YOU Jewish?” he asked. “Yes I am,” and he took the lulav and etrog and said the appropriate blessing—while the Rabbi looked astonished.

It is high time we welcome back our Spanish Jews. We are the “Jewish people” and not “The Jewish Club.” It is time to welcome back all the lost Jewish tribes. That is debt we owe to our ancestors. We can do no less.

At our shul on Simchat Torah night, you could see all the Spanish Jewish men and women lost in a state of ecstasy, as they danced with the Torah. Since we have trouble getting a Minyan on the second day of Yom Tov, I instituted that we finish the Torah on Simchat Torah night; everyone celebrated with clapping and dancing, as we danced throughout the synagogues with our Torah scrolls, and on the sidewalk facing the shul for the whole world to see.

This modern custom actually dates back to the time when Russian Jews lived under the yoke of Soviet tyranny. The Russian government allowed Jews to affirm their Jewish identity by letting them dance in the streets. Elie Wiesel once commented that he was deeply amazed by the joy these Jews exhibited whenever he visited Moscow when he joined them in their celebration of Simchat Torah.[3]

For obvious reasons, this was something all the Spanish Jews of TBS could easily relate to; and so too, they all danced.

Even on Shabbat, at the end of the Torah reading, we took out all the Torah scrolls so that everyone who could not make it to the Shul on Simchat Torah could dance on Shabbat Bereishit—the first new parsha of the year. I explained that Shabbat absorbs the holiness of all the other days of the week, and that the lesson of Simchat Torah reminds us that everyone needs to celebrate the study of the Torah not only once a year—but throughout the year as well.

As rabbis, we need to think more imaginatively of how we can make the holidays more meaningful; sometimes, thinking outside the box can go a long way in improving the spirit of this most remarkable holiday.