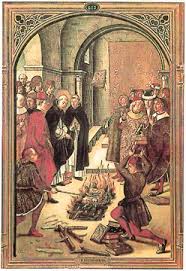 Information is the currency of democracy. —Thomas Jefferson

When I was a young sixteen-year-old, I remember becoming involved in the Chabad movement in Los Angelos, CA. I remember purchasing a translation of Judah Halevi’s classic theological work, “The Kuzari” that was translated by the early 20th-centuryOriental scholar Hartwig Hirschfeld. When an Orthodox rabbi looked over the book, he declared it, “heresy”, and ordered me to burn my newly purchased book. At the time, I protested and asked, “Could I merely pull out the Introduction and burn that section, but keep the book?” He said that would be fine.

For many years, I felt ashamed of my behavior. Several decades later I decided to use this personal anecdote as a teachable lesson. Often, I have long since pointed out to my students, burning ideas is a cowardly approach to dealing with personal insecurities about faith, as Freud observed long ago in his book, The Future of an Illusion. The only way to defeat ideas you don’t like is to come up with better and more convincing ideas and solutions.

The historian Norman Bentwich (1883-1971) wrote, “Philosophers tend to be viewed with suspicion by a large part of the community. Philosophers, by the very excellence of their thought, have in all races towered above the comprehension of the people, and have often aroused the suspicion of the religious teachers.” [1]

Bentwich makes a valid point. In the history of Judaism over the last 1900 years, Talmudists often viewed Jewish philosophers with a measure of mistrust, accusing them of harboring beliefs that were too dangerous for the masses. Throughout much of the yeshiva world, from the 18th century to the 21st century, no rabbinic student dared pick up the Guide to study—at least during the daytime, but you could see students huddled in their rooms, or sometimes even under a table reading the Guide clandestinely.

Maimonides’ philosophical ideas met considerable resistance in his day, and in the year 1233, not long after his death, Jewish leaders solicited the Dominican inquisitors and claimed Maimonides’ “heretical” teachings threatened to undermine all faiths. As one might expect, they burnt Maimonides’ Guide for the Perplexed at Montpellier, in southern France.

But a change of heart even amongst Maimonides’ greatest critics occurred once they realized they inadvertently made themselves vulnerable to future Dominican incursions. Within almost a decade, Pope Gregory IX led a campaign to burn other books held sacred by Jews, such as the Talmud. In the year 1242, the Catholic clergy collected twenty-four wagons of the Talmud, which they burnt in Rome. Thus, a dangerous precedent became established.

This condemnation was all the more ironic, considering how the Dominican theologians Thomas Aquinas (1225-1274) and Meister Eckhart (1260-1328) each appropriated many ideas from Maimonides.[2] In the Summa, Aquinas quotes R. Moses twenty-four times, always reverently referring to him as, “Rabbi Moses.”  Aquinas, in particular, was an Italian Dominican priest and Doctor of the Church.

After Aquinas’ death, William of Ockham (1285-1321) and John Duns Scotus attempted to ban Thomas’ works as dangerous to the Church. Yet, the quest for a pure and acceptable theology did not end with William of Ockham’s condemnation of Aquinas, for in 1324, the Catholic Church later condemned some of Ockham’s works as containing heretical ideas,[3] thus proving that Bentwich’s point was correct, as mentioned above.

Back to the Present

You may ask: Is this relevant? It definitely is! The above historical discussion about censorship proved to be one of many indictments for the medieval Church and rabbis who engaged in that kind of intellectual internecine warfare against their faith’s freethinkers and other intrepid intellectual explorers. But nowadays, with the benefit of hindsight, it is all the atrocious for Facebook and Twitter to engage in blocking political content of ideas its leaders and engineers find “offensive.”

Today, James O’Keefe’s Project Veritas released a surprise but damning report on Thursday that shows Twitter employees admitting they censor people’s’ right-leaning accounts, including banning them from the network because they do not agree with their political views! Had this happened in Russia, Iran, or China, none of us would be surprised—but in the 21st century United States? This is truly an affront to our society!

One Twitter employee named Pranay Singh, admitted that the majority of their algorithms are geared in such a manner that they target people with certain political views. Their method is insidious, they “shadow ban” right-leaning accounts, which essentially bans them from the platform without letting them know that they have been banned while allowing left-leaning accounts to slip through without the same scrutiny.” And they unabashedly admit:

Many friends of mine on Facebook often get in the Facebook jail for asserting political views that the Facebook leadership does not like or approve. Let us hope that a class action suit is initiated. This is a battle that anyone along the political spectrum ought to agree upon. The Left would not like it if the political right behaved this way. Ideas deserve to be heard and debated in the public forum.