In the previous posts, we touched upon the dynamics of the shadow archetype that hides the inner person that exists inside us. The key to a optimum psychological state of health requires that we get understand the hidden depths of our souls and psyches. Here is a remarkable story about coming to terms with one’s shadow, compliments of  NY Times and the Failedmessiah–two excellent websites.

From Skinhead to Orthodox Jew 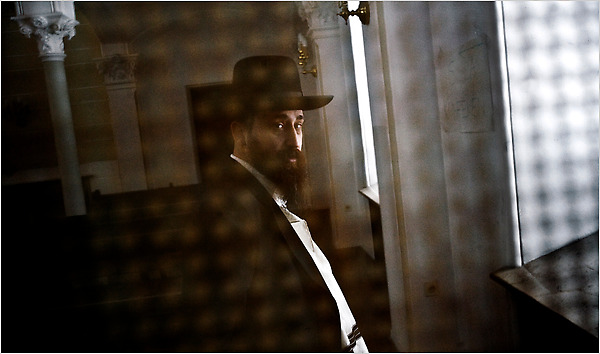 Pawel in the Warsaw synagogue. A former truck driver and neo-Nazi skinhead, Pawel, 33, has since become an Orthodox Jew, covering his shaved head with a yarmulke and shedding his fascist ideology for the Torah.

WARSAW — When Pawel looks into the mirror, he can still sometimes see a neo-Nazi skinhead staring back, the man he once was before he covered his shaved head with a yarmulke, shed his fascist ideology for the Torah and renounced violence and hatred in favor of God. 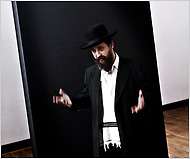 Pawel in the Warsaw synagogue. A former truck driver and neo-Nazi skinhead, Pawel, 33, has since become an Orthodox Jew, covering his shaved head with a yarmulke and shedding his fascist ideology for the Torah.

“I still struggle every day to discard my past ideas,” said Pawel, a 33-year-old ultra-Orthodox Jew and former truck driver, noting with little irony that he had to stop hating Jews in order to become one.

“When I look at an old picture of myself as a skinhead, I feel ashamed. Every day I try and do teshuvah,” he said, using the Hebrew word for repentance. “Every minute of every day. There is a lot to make up for.”

Pawel, who also uses his Hebrew name Pinchas, asked not to use his last name for fear that his old neo-Nazi friends could target him or his family.

Pawel is perhaps the most unlikely example of a Jewish revival under way in Poland in which hundreds of Poles, a majority of them raised as Catholics, are either converting to Judaism or discovering Jewish roots submerged for decades in the aftermath of World War II.

Before 1939, Poland was home to more than three million Jews; over 90 percent of them were killed by the Nazis during the Holocaust. A majority of those who survived emigrated. Of the fewer than 50,000 who remained in Poland, many either abandoned or hid their Judaism during decades of Communist oppression in which political pogroms against Jews persisted.

But Rabbi Michael Schudrich, the chief rabbi of Poland, noted that 20 years after the fall of Communism, a historical reckoning was finally taking place. He said Pawel’s metamorphosis illustrated just how far the country had come.

“Before 1989 there was a feeling that it was not safe to say ‘I am a Jew,”’ he said. “But today, there is a growing feeling that Jews are a missing limb in Poland.”

Five years ago, the rabbi noted, there were about 250 families in the Jewish community in Warsaw; today there are 600. During that period, the number of rabbis serving the country has grown from one to eight. The cafes and bars of the old Jewish quarter in Krakow brim with young Jewish converts listening to Israeli hip hop music. Even several priests have decided to become Jewish.

Pawel’s transformation from baptized Catholic skinhead to Jew began in a bleak neighborhood of concrete tower blocks in Warsaw in the 1980s. Pawel said he and his friends reacted to the gnawing uniformity of socialism by embracing anti-Semitism and an extreme right-wing ideology. They shaved their heads, carried knives, and greeted each other with the raised right arm gesture of the Nazi salute.

“Oi Vey, I hate to admit it, but we would beat up local Jewish and Arab kids and homeless people,” Pawel said on a recent day in the Nozyk Synagogue here. “We sang about stupid stuff like Satan and killing people. We believed that Poland should only be for Poles.”

One day, he recalled, he and his friends skipped school and took a train to Auschwitz, the Nazi death camp, near Krakow. “We made jokes that we wished the exhibition had been bigger and that the Nazis had killed even more Jews,” he said.

He says his staunch Catholic parents, a teacher and a businessman, suspected he was a skinhead, but hoped it was just a phase.

“I never got caught for what I did or got arrested, so my parents didn’t realize things were so bad,” he said. “But they would get stressed out when I would come home in the morning wounded and covered in blood.”

Even as Pawel embraced the life of a neo-Nazi, he said, he had pangs that his identity was built on a lie. His churchgoing father seemed overly fond of quoting the Old Testament. His grandfather hinted about past family secrets.

“One time when I told my grandfather that Jews were bad, he exploded and screamed at me, ‘If I ever hear you say such a thing again under my roof, you will never come back!”’

Pawel joined the army and married a fellow skinhead at age 18. But his sense of self changed irrevocably at the age of 22, when his wife, Paulina, suspecting she had Jewish roots, went to a genealogical institute and discovered Pawel’s maternal grandparents on a register of Warsaw Jews, along with her own grandparents.

When Pawel confronted his parents, he said, they broke down and told him the truth: that his maternal grandmother was Jewish and had survived the war by being hidden in a monastery by a group of nuns. His paternal grandfather, also a Jew, had seven brother and sisters, most of whom had perished in the Holocaust.

“I went to my parents and said, ‘What the hell?’ Imagine, I was a neo-Nazi and heard this news. I couldn’t look in the mirror for weeks. It was a shock and it still is a shock to me,” he said. “My parents were the typical offspring of Jewish survivors of the war, who decided to conceal their Jewish identity to try and protect their family.”

Shaken by the knowledge of his Jewish roots, Pawel said he decided to go see Rabbi Schudrich, who gave him a copy of the Hebrew Bible.

“I spent weeks cloistered like a turtle, questioning everything I had believed. I had a feeling deep inside of me that was so strong, that I had to do it, that I had to become Jewish. When I asked a rabbi, ‘Why do I feel this way?’ he replied, ‘The sleeping souls of your ancestors are calling out to you.”’

Pawel said his transformation was arduous, akin to being reborn. He said he forced himself to reread “Mein Kampf” but couldn’t get to the end because he felt physically repulsed.

At the age of 24, he was circumcised. Two years later, he decided to become an Orthodox Jew. His wife began to wear a sheitel, the wig Orthodox women wear to show modesty.

Today, they have two children, whom they are raising in a Jewish home. Pawel is also studying to become a shochet, a person charged with killing animals according to Jewish dietary laws. “I am good with knives,” he explained.

Pawel said he relished the meaning and discipline that ultra-Orthodox Judaism brought to his life. He acknowledged he was drawn to extremes.

“When I do anything, I don’t go halfway,” he said. “I still struggle to wake up to pray every morning. I have to remind myself that if I eat meat, I can’t have milk with my coffee because it is not kosher. I have to think before I can do anything.”

His parents did not embrace their Judaism, but he said his mother sometimes visited his home on Fridays and lit the Sabbath candles.

When his father died last year, Pawel went to the Catholic cemetery and said kaddish, the Jewish prayer of mourning, over his grave.

While Poland has sought to overcome a history of anti-Semitism, cultivating strong ties with Israel, embracing Klezmer music and Yiddish writers as national treasures, and apologizing for past transgressions, Pawel noted that he was still targeted by the same anti-Semites who once counted him among their ranks.

He lauded a new general receptivity toward Judaism among the younger generation of Poles, but said that some had nevertheless internalized the hatred of their parents.

“When younger people see me on the street with my top hat and side curls they sometimes laugh at me. But it is the old ladies who are the meanest,” he said. “Sometimes, they use the language I used when I was a skinhead and say, ‘Get out and go back to your country’ or ‘Jew go home!’ Others feel the hole left in Poland by all the Jews that were killed and come over and say, ‘shalom.”’

Whatever the challenges, Rabbi Schudrich said Pawel’s transformation offered a decidedly Jewish morality tale about the possibility of change.

“The lesson of Pawel’s story is that one should never lose hope,” he said. “The impossible just takes a little longer.”