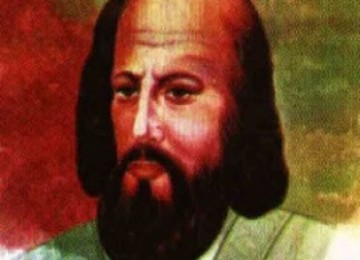 The Golden Age of Islam extended from the 8th century to the 13th century, when much of the historically Islamic world embraced a flowering of scientific, economic and cultural prosperity until the time of the Mongol conquest of Baghdad in 1258 CE , when the Islamic Golden Age officially ended. Before that time, Islam was vastly ahead of their counterparts in Europe, and excelled in just about every ancient secular and scientific endeavor. As I was perusing some of the books from one of my book vendors’ emails, the Islamic name of Ghazali appeared. Being familiar with a number of Muslim medieval scholars like Ibn Sina, Rumi, Averroes, al-Farabi, Ibn Arabi, I decided to look up the Islamic thinker, Abu Hamid al-Ghazali (1055-1111), a Sufi-thinker who  is well known in Muslim circles for his wisdom:

Some of his wise aphorisms include:

How true, God’s Name is always being bantered about by “religious” fanatics who use God’s Name as an excuse to commit any kind of atrocity against the non-believing Other. It is also used by politicians who will use God to obtain their fiendish desires.

This particular aphorism certainly applies to much of what we see with respect to the Global Jihad taking place in continents all over the world. Yes, bad and evil conduct certainly produces disillusion with faith—and atheism is certainly on the rise today as less and less young people frequent the traditional places of worship.

It is significant that both Sufi and Kabbalistic texts found a way to sublimate the violent impulses of holy war, by internalizing it in purely spiritual terms. Sufism for most of its history has enjoyed a well-deserved reputation for open-mindedness and tolerance.

However, this broadness of mind never applied to Ghazali’s worldview. Although one might presume Ghazali stresses the importance of fighting the inner enemy—but he evidently had no compunctions about fighting the “external enemy,” and this is where his idealism seems to have collapsed along with his wisdom.

Sectarian differences often make people forget about their idealism and higher values; religion often is more pre-occupied with “being right” than “being righteous.” Ghazali’s disdain for one of Islam’s most brilliant thinkers, Avicenna is a classic illustration of what righteous indignation with a tinge of fanaticism is capable of doing. In his book on “The Incoherence of Philosophy,” Ghazali issued a decree (fatwa) concerning anyone who teaches Avicenna’s philosophy is a “kafir” –an apostate of Islam. Once labeled a kafir, it is permitted for the pious Muslim to kill the apostate.[1]

What were the three heretical views Avicenna espoused?  [For the sake of contrast, I will briefly compare Avicenna and Ghazali with some of Maimonides’ theological positions.]

Semites have always been a contentious people when it comes to matters of faith. To this day, the Shiites and the Sunnis still argue over, “Who is an Apostate?” much like Jews still fight among themselves, “Who is a Jew?” Fanaticism has always been a driving force among zealots. Jewish history bears witness to these unfortunate phenomena too over 2000 years ago. This much has not changed over history—even now, as our society is rapidly retrogressing to the darker periods of human history when men like Ghazali, Torquemada, and others determined who would live or die based on their personal belief system.

Perhaps the greatest tragedy is that Ghazali possessed a gift of wisdom and insight; yet because of his disdain for other scholars’ theological beliefs, he and similar thinkers led the Muslims along a narrow corridor of the mind that has cut itself from the human progress and positive societal development.

[1] Great minds sometimes suffer from moments of moral blindness. I would add that as a side note, Maimonides might have been influenced by Ghazali. According to Maimonides, (theoretically,) a heretic deserved to be executed too. He writes:

The term “Apikorsim” (Epicureans) pertains to any Jewish person who denies the divinity of the Torah and the belief in prophecy. Ideally, they deserved to be executed in public by the sword (beheading). However, if this is not possible, a subterfuge ought to be developed to facilitate their death. For example:  If one sees such a person descend to a cistern, and a ladder is available; he should  find an excuse to take the ladder, saying: “I must hurry to take my son down from the roof. I shall return the ladder to you soon.” Similarly, one should devise other analogous plans to cause the death of such people” (MT Hilchot Rotzach 4:10).