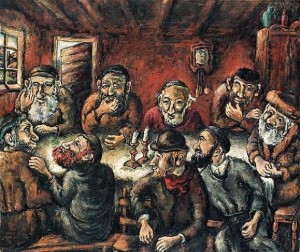 The Wise Men of Chelm have an iconic and legendary status in the history of Jewish storytelling. According to traditions to have emerged from Eastern Poland, the town of Chelm had a dubious reputation for being incredibly foolish. Whenever the townspeople were confronted with any kind of common everyday problem, its leaders always demonstrated a penchant for overlooking the obvious solutions. Instead, they proposed silly solutions that never worked.

Here are a few stories that illustrate their problem-solving skills:

One day, the townspeople of Chełm decided to build a new synagogue. The leaders sent their strongest men to a mountaintop to gather heavy stones for the foundation. The men put the stones on their shoulders and trudged down the mountain to the town below. When they arrived, the town constable yelled, “Foolish men! You should have rolled the stones down the mountain!” The men agreed this was an excellent idea. So, they turned around, and with the stones still on their shoulders, trudged back up the mountain, and rolled the stones back down again.

The shammes (caretaker) of the synagogue decided to install a charity box so that the fortunate might share their wealth with the needy. On Shabbat eve, he announced to the congregation that a new opportunity for a mitzvoh was available. “Not so fast, my clever friend! Surely having a charity box will prove to be an easy target for all would-be thieves! The shammesthought long and hard that night, and announced the next day that he had found a solution. Pointing upward, he showed, the poor box was now suspended from a chain at the ceiling, high, high, high overhead. “But now how do we put money in the box?”

One of the things that are so striking about the Chelm stories is that its wise men are incredibly arrogant in their wisdom. They always take immense pride in finding unusual solutions that never work. The wise men of Chelm are stubbornly foolish and show contempt for logical and common sense solutions.

Lest you—the reader—think that the Chelmites are sui generis, think again. They exist in our halls of justice and government.

The endless debate over gun-control is an excellent example of Chelmite thinking on the part of our spineless political leaders. The recent shooting rampage by Aaron Alexis reveals a man who grappled with his own inner demons and psychosis. He had been treated on numerous occasions for psychological issues, e.g., sleep deprivation, paranoia, and anger issues. Had psychological testing been required as an a priori condition for owning a  firearm, perhaps lives could have been saved.

Personally, I have nothing against responsible and psychologically fit people choosing to own a gun for protection.

Now, it seems to me that the recent Washington shooting might have been avoided had the state required psychological testing for anyone wishing to own a gun. In fact, if every state required psychological testing, we might be able to cut down the number of accidental shootings, or even willful shootings that seem to occur every year in our great nation.

One cannot expect a family to recognize or, for that matter, even be willing to admit that their son may have deep-rooted psychological problems requiring professional help. In addition, I think the question of machine guns, semi-automatic weapons, assault-rifles, and similar type weapons ought to be banned except for the military or police. Private individuals do not need to act like Rambo when a vagrant is breaking into their home. [1]

In Judaism, safety is a religious concern. The Bible requires that a roof be properly gated, in order to prevent people from falling off of it (Deut. 22:8). One precept in particular is especially important, “You shall not curse the deaf; you shall not put a stumbling block before the blind, but you will fear your God; I am YHWH ” (Lev. 19:14).

This verse includes two types of prohibitions: (1) placing a stumbling block in front of the blind for sport or entertainment, (2) taking advantage of someone’s ignorance–especially for pecuniary gain. The verse stresses that a God fearing person will not take advantage of anyone for any reason.

In the parlance of Scriptures,  “God fearing,” is the biblical way of describing a moral person who acts with a reverence toward life. God-fearing also indicates that Creator and Judge of the world will hold all such offenders accountable for disrespecting human life. Authentic piety is best reflected by acts of compassion and consideration–especially toward individuals who suffer from a serious disability–whether physical, emotional, intellectual, and psychological. [2]

It is also instructive that Maimonides asserts that enabling someone to commit a crime, (e.g., the individual who offers a bribe, or offers to pay interest on a loan) violates the above biblical dictum.[3]

I would argue that we apply the same standards that exist for other professionals in our country also be applied to anyone wishing to own a gun. The time has come for the gun-lobby to start leading the campaign to protect the country from individuals who endanger public welfare. Ultimately, such a responsible move will not diminish the constitutional rights of owning a gun–but such sensible legislation will enable all of us to breathe easier.

The gun lobby has a powerful presence in our country, but even they ought to support psychological testing. Owning a gun is a responsibility, and it is to society’s interest that irresponsible people not be given unfettered access to guns that have a long history with psychosis and other psychological abnormalities.

Denying the obvious makes it clear that both our leaders in government and those defending the right to own a gun—any gun—reveal a myopic view of reality that can only best be described as Chelm-esque.

[1] Notwithstanding the biblical verse,  “If a thief is caught in the act of housebreaking and beaten to death, there is no bloodguilt involved” (Exod. 22;1), rabbinical tradition recognized early on that if a son attacked and killed his father when he broke in, he would be guilty of manslaughter. Similarly, if it was clear the thief had no weapon on his person, killing him would constitute an act of murder on the part of the homeowner.

[2] One could further argue that this proscription has a variety of other business applications restricting sellers from selling inferior or defective merchandise  (e.g., Lemon laws), not to mention products that are harmful such as cigarettes, liquor, drugs, poorly constructed toys, properties, in addition to selling dangerous weapons to individuals who are too irresponsible to properly  use them.