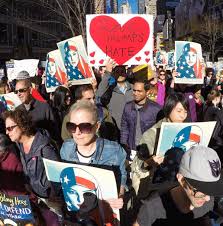 It is one thing to hear people pray in a Mosque saying “Allahu akbar” in unison, for we all have our unique way of expressing prayer.

However, when you hear somebody on a jet that is flying 40,000 feet in the air screaming to the top of his lungs, “Allahu akbar!”, what is your reaction? What is your heart and mind telling you? If you’re like any normal human being, you are most likely experiencing a sense of terror; you fear that your life might be ending within the next couple of minutes or seconds, as your life flashes before you.  I can guarantee you the last thing you are worried about is whether feeling this way might get you  labeled as “Islamophobic” or a “racist” despite the fact that Islam has nothing to do with race.

Once again, another Muslim terrorist named Sayfullo Saipov, proudly screeched, “Allahu akbar!” after running down some twenty people, killing eight people. One outspoken Muslim imam named Omar Suleiman has successfully persuaded Google to bury anything that is remotely, “anti-Islam.” He complained on CNN how the media perceives “Allahu akbar!” serves what he called, “a nefarious agenda.” Once again, instead of identifying with the victims of the terror attack, Suleiman and his ilk seem as though are trying to get us to identify with the perpetrator.

George Orwell referred to this kind of logic as “doublespeak.”

Frankly, if I were a true Muslim, I would be outraged—but not by those who are complaining about Muslim violence and deviance. Instead I would redirect my rage toward my fellow Muslims who are through their fanaticism single-handedly destroying their religion. They are the ones who have created this problem in perception. It’s time the civilized world of Christians, Buddhists, Jews, Hindus, and responsible Muslims take a different approach and unequivocally condemn religious inspired violence.

It is disturbing that organizations such as CAIR and other Islamic affiliates seldom organize large 100,000-person rallies condemning the kind of violence that is perpetuated by its apostles of hate. Such gatherings now and then occur in Europe, but not in this country. Islamic apologists created a new word, “Islamophobia” as a means of suppressing any kind of criticism toward Islam as a religion. It may seem strange, we do not ever hear of someone being “Judeao-phobic” or “Christian-phobic” because being afraid of Judaism or Christianity doesn’t really make any sense. Being afraid of Islam (which is what Islamophobia suggests) has nothing to do with being afraid of Muslims. I think the Muslim propagandists should have come up with a better term. Criticizing any religion is not a crime in a country that champions free speech.

People often attribute the following remark to the atheist philosopher Christopher Hitchens, who allegedly said, “The word Islamophobia is a word created by fascists, and used by cowards, to manipulate morons.” Actually, it was the brilliant physicist Richard Dawkins who made this remark. While I would not use the same caustic language Hawkins uses, I do agree the term “Islamophobia” is a contrived linguistic weapon to suppress honest dialogue about how people feel about Islam as a religion. Islamophobia means “the fear of Islam,” and not the fear of Muslims.

Criticism of religion should not equated with hatred; nor should people who criticize ANY religion be tarred and feathered, or shamed for expressing their concerns about militant behavior of certain Muslims who promote violence in the name of the Quran. Nor does criticizing Islam make one into a racist.

Whatever you wish to call it, it is a term designed to suppress criticism of Islam. Whether you are a rabbi, priest, a Zen Roshi, a Catholic priest or a Protestant minister, you have every right to criticize your religion of origin for the problems pertaining to it as a faith. In ancient times, the prophets pulled no punches on criticizing the Judaism of their times and the way it was practiced. Quite the opposite. Judaism benefited from the prophetic critique.

Islam can also benefit from an honest critique of its doctrines, its holy books, and the way people practice their faith. Islam is not the exception, but it can be a great example if its followers pursue this fearless path of moral integrity. Let us pray that responsible imams take this criticism not as a sign of hatred or intolerance, but as an invitation to examine and discuss a topic that demands an ethical response.

In my next column, I will discuss the overuse of “anti-Semitism” to add further balance to the topic I have raised about religious labels.

*
Rabbi Samuel is spiritual leader at Temple Beth Shalom in Chula Vista.  He may be contacted via michael.samuel@sdjewishworld.com