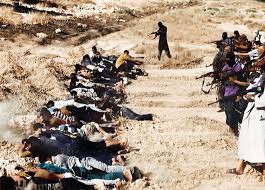 Maimonides raises a relevant question about the nature of repentance in his famous halachic tract, The Laws of Penitence, “How do we know whether a person has truly achieved repentance?  If a person finds himself in the same situation where he now has the ability to sin in the same exact manner he did earlier, but he consciously refrains from doing so—not because of fear or ability,  but from conviction—that person has truly repented. For example, if a man had an illicit sexual liaison with a woman, and later, they found themselves at a private place, in the same country, feeling the same sexual chemistry—but he refrains from giving in to his desire, this person has repented.[1]

As Jews, the American Jewish nationalist, Meir Kahane (1932-1990) famously coined the iconic phrase, “Never Again!” and this saying has become a part of every Jew’s lexicon. The State of Israel in particular, lives by this motto as well. Jews will never allow themselves to go like lambs to the slaughterhouses again.

My father, Leo Israel Samuel (z”l) was a Holocaust survivor and he once told me about conversation he had with Amon Leopold Goeth (the infamous villain of Schindler’s List), the  commandant of the Kraków-Płaszów, Poland. He told some friends, “The Germans taught the Turks how to kill the Armenians . . . .” My father was there while they had this conversation; he worked for a short time as his tailor; and he asked Goeth, “Who were the Armenians?” Goeth sneered, “The Armenians were a type of Jew . . .”

Goeth’s sardonic remark ought to remind us that when it comes to the genocide of any people—“We are all Jewish,” in a manner of speaking.

As the world watches the never-ending saga of the Israeli and Gazan conflict, civilized countries of the world are looking away from a very serious genocidal attack that is taking place in one of the oldest Christian communities in the world, the Assyrian Christian population of Mosul, Iraq, which is now controlled by ISIS. A couple of weeks ago, the Islamic Jihadists issued the following ultimatum: If they did not leave by July 19th, they would all have to convert to Islam, pay a fine, or face death by the sword. Within a few days, 3000 of the Assyrian Christians fled, while the Jihadists began their systematic destruction of all the ancient Christian relics that the country proudly kept on display during the Hussein era. A statue of the Virgin Mary outside of one of Mosul’s churches was destroyed and was later replaced with a black flag. This Christian is one of the last left in Mosul, as most others have fled, many leaving with only the clothes on their backs.

Jihadist Islam’s behavior is consistent with what Jihadists have done many times in the past. In Jerusalem, the Mufti routinely destroys any archaeological relics regarding ancient Israel’s past. In 2001, the Taliban destroyed 1,700-year-old sandstone statues of Buddha with anti-aircraft and tank fire in Afghanistan. There is a good reason for their destructive actions: they wish to permanently change the narrative of the non-Muslim peoples; like the prescriptions found in the Bible, where Moses orders the Israelites to destroy every remnant of Canaanite culture, the Jihadists are a lot like ancient Israelites on steroids. Hegel once said that “Islam was Judaism gone mad,” and while we may find this language somewhat politically incorrect and provocative, I would qualify Hegel’s remark, “Jihadist Islam was Judaism gone mad.” Nobody has a problem with law-abiding and ethical Muslims who go about their business in a responsible way; the world’s problem is with the Jihadist strand of Islam—and its followers are legion. Heads of Christians are literally rolling down the streets of Mosul and other cities. Unfortunately, the moderate Muslims of the world are a quiet breed; they fear to speak out because of the dangers their families would face.

What is happening in the ISIS controlled sections of Iraq and Syria is a template for other countries where Jihadists threaten the “Sunday people” in addition to the “Saturday people.” General Sisi saved the Coptic communities of a similar fate in Egypt, when the Muslim Brotherhood—a kissing brother of the Hamas—threatened to wipe out one of the oldest Christian communities in the world going back nearly 1900 years.

Why should Jews be concerned? What is happening to the Christians can easily happen to the Jews if the United States, the Vatican, and the Western countries fail to stand up to the newest incarnation of Nazism of our time—fueled by the some of the most fanatical passages of the Koran, who interpret their scriptures quite literally.

When the President asked for 500 million dollars to support the Syrian Rebels, maybe somebody forgot to tell him that the Syrian rebels have joined forces with ISIS.

Obama’s support of the Rebel/ISIS coalition in Syria ought to make us wonder: Why would anyone in the White House want to see a new Islamic caliphate emerge in the Middle East? The President has several members in his DHS who are members of the Muslim Brotherhood,[2] a known terrorist organization that is also the godfather of Hamas. One of the DHS senior advisers is a man named Mohammed Elibary, who is also a member of the Muslim Brotherhood (a Sunni movement) who supports the emergence of a new Muslim caliphate[3] in the Middle East.[4] I suspect that his advisors encouraged the President to allow the ISIS (another Sunni movement) to arise so that it might serve as a counterweight to the Shiites of Iran. These two groups would be in a perpetual state of war with one another. While tactically, this might be the case, it is also a reckless policy could just as easily backfire against everyone. Why? One reason is that there are unintended consequences that we must anticipate. Dr. Frankenstein wanted to find a way to help people overcome death, but in his zeal for success, he created a monster. We may well be watching a similar story unfold in the Middle East today.

In the meantime, the moral and political leaders have a role to preserve the precious and peaceful Christian communities who have always lived in peace with their neighbors. We owe history much for their existence and preservation. As Jews, can we watch another genocide take shape and  say or do nothing about it? I hope we will show the world that we will not stand by the blood of our fellow Christian neighbors as the fanatical Jihadists assault civilization and return us back to the decadent centuries of an early Islam.

[3] In one tweet, Mohamed Elibiary, a controversial figure and member of DHS’s Homeland Security Advisory Council (HSAC), discussed what he described as the “inevitable” return of a Muslim caliphate Friday on Twitter. “As I’ve said b4 inevitable that ‘Caliphate’ returns,” Elibiary tweeted in response to a question about the terror group Islamic State of Iraq and the Levant (also known as ISIS, or the Islamic State of Iraq and al-Sham), which is currently seeking to overthrow the Iraqi government and instate strict Sharia law in the country. See https://twitter.com/MohamedElibiary/status/477503616794644480