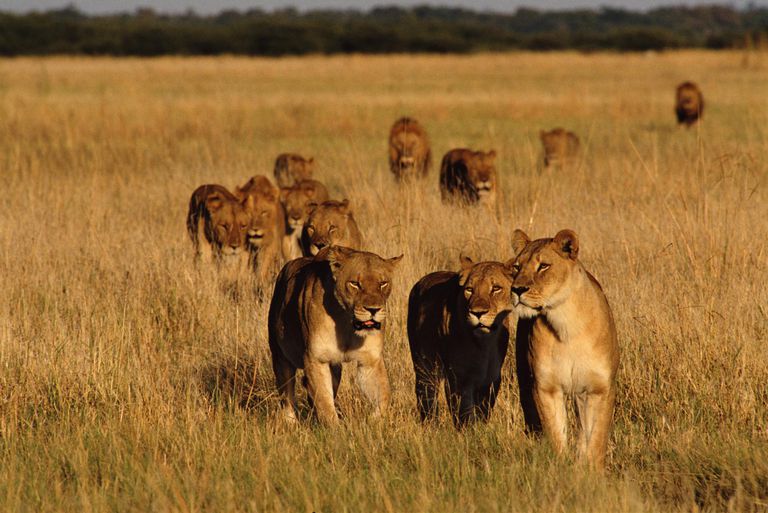 The story is a familiar one. Once a man went out for a walk through the forest. To his sudden surprise, he sees a grizzly bear chasing him. After the bear traps him, he prepares himself for his last rites, he says the Shema Prayer, and to his surprise he sees the bear praying with his eyes closed! But to his surprise, the bear is not reciting the Shema—he is instead saying the blessing, “HaMotzi lechem min ha’aretz!”

By now, most of you heard about how a pride of lions killed suspected poachers at a game reserve in Africa. A field guide found human remains the next day. “Clearly, the poachers had walked into a pride of six lions and some, if not all had been killed,” according to a Facebook post by Fox.

“They were armed with, amongst other things, a high powered rifle with a silencer, an ax, wire cutters and had food supplies for a number of days – all the hallmarks of a gang intent on killing a rhino and removing their horns,” said Fox.

I am reminded of an old medieval aphorism, “Man proposes, but God disposes”

The eyes of all look hopefully to you;
You give them their food in due season.
You open wide your hand
and satisfy the desire of every living thing.
You, LORD, are just in all your ways,
faithful in all your works.

After the reading the news story from Africa, this passage took on new meaning for me. Yes, the ways of God are truly just. God not only provides His creatures with an appetizer, but also with main-course and dessert!

Jewish tradition has much to say about hunting.

As Jews, we, in particular, have much to comiserate about whenever we see God’s endangered species being threatened. Anti-Semites, too, have often hunted Jews, throughout history. The Nazis paid a premium for capturing Jews—whether dead or alive.

In the Tanakh, God beckoned Noah to preserve the animal species. The Book of Leviticus tells us “You shall not slaughter an ox or a sheep on one and the same day with its young” (Lev. 22:28). Both Philo of Alexandria and Ramban believe the purpose of this prohibition aims to prevent the destruction of a species. In one famous midrashic text we read:

One of the principle reasons why the Torah limited animals for human consumption that had two kosher characteristics (animals that have split hooves and chew their cud) is to preserve the animal species as a whole. Thus, the Torah imposed limitations upon the human appetite.

One 17th century noted,  “…It is certain that those who shoot arrows after birds and beasts for no purpose at all other than to learn archery, and kill animals for no reason, are destined to stand in judgment for it; for it is not the way of Israel, the holy congregation, to commit evil to any creature for no reason. . .  Killing an animal in order for the joy of pure sport is sheer cruelty “[4]

Anyone who goes to the San Diego Zoo might be surprised at a large number of endangered species that the zoo and other similar habitats are trying to preserve. Unfortunately, there are some people who will do anything to kill these species, for rhino horns are often used in Chinese medicine and their price is considered more valuable than gold.

In my conversation with some Orthodox rabbis, I was surprised to see a number of them argue that there is a place for “big game” centers provided the monies go to promote animal growth in African communities. While this may be true in theory, the corruption and lust for profit may prove to be counterproductive; aside from this, poachers will always try to find a way to circumvent existing laws.

Furthermore, popularizing these big-game trophies only serves to motivate other would be hunters who live for the thrill of the moment.

As Jews who love animals, we cannot stand idly by as malignant people attempt to depopulate the world of these magnificent creatures. Instead of justifying the barbarism of these hunters with contrived Halakhic arguments, we need to remember that God expects human beings and animals to live in a world peaceably with these rare creatures.